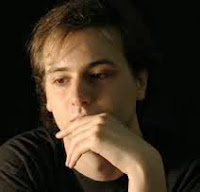 Last Saturday there was a debate at OT301 in Amsterdam between the French philosopher Tristan Garcia and the American philosopher Graham Harman. A transcript will be produced, as Harman mentions on his blog. It was something. Many people, ’70 type of underground scene, darkened room and a few spotlights. As if Foucault was visiting us. Garcia’s performance fascinated me. And I’m not really sure why. He might have new profound thoughts about ontology. I will surely check his work. Of course I should elaborate a bit more on why he made me curious enough to further explore his philosophical thinking. And indeed, I could try to reflect on some of his moving statements, such as “Anything is something, no matter what”, “Anything is something, no less, no more”, “The thing is never in-itself, but outside of itself” and “To be is not to comprise, and to comprise is not to be”. But I can’t really. Garcia was quite hard to grasp, occasionally he even seemed unintelligible. Nevertheless I did sense that he is on to something. I saw it, in his way of speaking. I saw it in his eyes. He writes novels as well I was told afterwards. Literature and ontology. Like Sartre, a young Sartre.
Gepost door Emanuel Rutten op 21:27 2 opmerkingen:
Labels: Amsterdam, debate, Drift festival, Graham Harman, Sartre, Tristan Garcia

Does reality exist? A debate with Graham Harman

In 2010 I completed my master thesis in philosophy (see here for an addendum to it). In this thesis I develop a theory of knowledge that comes very close to what the French philosopher Quentin Meillassoux calls 'strong correlationism' (without me knowing this term at that time; I didn't even know who Meillassoux was). Yesterday I entered into a debate at Felix & Sofie with the American philosopher Graham Harman (who, like Meillassoux, rejects strong correlationism). My opening statement to the debat is available below.

Now, the-world-in-itself is inaccessible for us. It is impossible for us to get outside ourselves in order to compare the world as it is ‘in itself’ to the world as it is ‘for us’. We do not have access to such an absolute stance. After all, we are trapped in our human condition. We can only access the world from our human viewpoint. It is impossible for us to step outside our relation to the in-itself. Therefore we cannot know anything that is beyond this relationship. To put it differently, we cannot think or perceive something while abstracting from the fact that it is still us who are thinking or perceiving it. Indeed, if we think or perceive anything as true about the in-itself, then what we think or perceive is still a human thought or human experience. All our knowledge is qualified as human knowledge. This is inevitable. We can’t get rid of this qualification of our knowledge. Absolute knowledge is unreachable.

Should this all worry us? Not at all! For within the context of the world-for-us we can justify many, many claims. Examples include, but are not limited to, logical propositions such as the principle of non-contradiction, mathematical statements such as the theorems of set theory, ordinary claims (such that I exist, that you exist and are not merely a product of my thought, that the glass of water in front of me exists extra-mentally as well, that Paris is the capital of France, etc.), and moral claims, such as that it is wrong to torture the innocent. In fact the whole project of metaphysics can still be carried out within the context of the world-for-us, as long as we realize that all our claims, metaphysical and non-metaphysical, are about the for-us and cannot be justified as claims about the in-itself. And this is fine. For what else could we as human beings wish for than to justify claims about how the world is for us? Indeed, what else could we as human beings wish for than to be justified as human beings? After all, we are human beings, not gods. The in-itself is inaccessible. That is what we should concede to the skeptic. But we can still find truth: objective universal human truth within the-world-for-us. And for us humans, that should be sufficient."